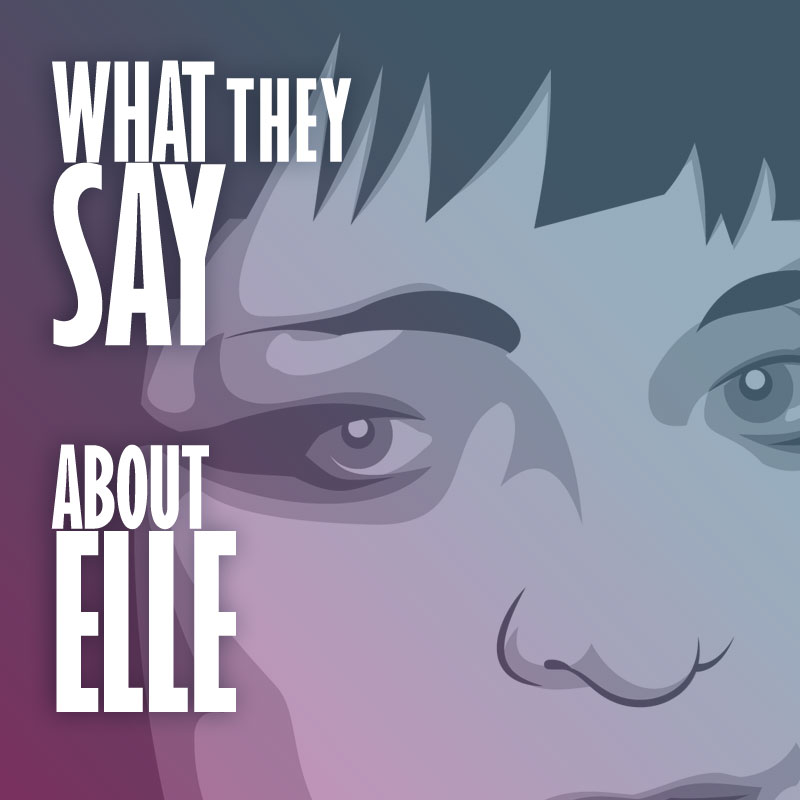 Some of the emails, comments and posts from around the world.

Just wanted to let you know that since being inspired by your recent ezine a few weeks ago to eat better and work out again, I’ve dropped 9 pounds. Thanks for your encouragement Elle!

Passionate, real world, and always full of solutions, Elle does a fantastic job of getting to the heart of what motivates us. I am always amazed at her ability to extract lessons from our thoughts and behaviors, and ultimately find ways to take our life to the next level.

"Very nice Elle. Thank you for sending. The timing is good as I needed this. One of my leadership lessons I like to pass on is '...if you tolerate it, it will continue.' This can apply to both good and bad, and is something that has helped me during my long career that I will soon be retiring from. We are at the airport now waiting for our flight back to Seattle as my tour here in Hawaii is done. On to the next chapter..."

Cassie, the lady who took on the challenge and won

"Hi Just wanted to say thanks for the last challenge. I successfully handed in my Queen's Guide Award and found out before the end of the challenge that I have been awarded it. I will receive my badge and book back in April at my first presentation and wait for my trip to London for my official presentation in the next 24 months. It is 3 years of hard work for me. Nothing like the speed you did it in but your story did inspire me. My mentor nearly gave up on me. I nearly gave up. I'm really not sure what made me finish. Stubbornness? Because I didn't want to let the people down that had supported me? Because I had told enough people that I was attempting it, that I didn't want to have to tell them I had failed? I don't think at any point I thought I would actually achieve it! I also applied for a new job. The last time I applied for a job was 4 years ago and it really was my dream job so when I didn't get it I was devastated, I lost confidence and it took a lot to persuade myself that applying and not succeeding was better than doing nothing! Simple I know but my brain had decided that the risk of failure was too painful and too likely to be worth applying! I've got over that nonsense now! Anyway, Thanks for the new version of your 100 day challenge. As with the previous, I won't spoil the fun by giving it away to other people but I just wanted to check that I am ok to have it printed for use myself. I'm not going to attempt the 220ish pages on my printer but I find it much easier to have in my hand not electronically"

"Elle, I’m on day 9. Things have gone almost exactly like you suggest they would, bit of a roller coaster. A few days ago I realized that I needed to change the way I was setting my goals some were small stuff, others bigger but I could see I was not really going to get to that real change point unless my goals were set differently. Up until today’s email I tended to set goals with the how will this be done thinking and this was factored in to the level of difficulty of goal attainment. Hence I was setting goals that I knew with better / whatever/ work practises or more effort to complete tasks, organization etc., they would be reached. This gives you a nice feeling of reaching a goal but I needed to be put out of your comfort zone. Most people get phased out by the details, you really don't need to know the details - you just need to know what you want. So that line form today pretty much sums it up. I guess I need to aim higher and not worry about how to get there. Thanks for the 100 days, it has given me a real focus. I’ll let you know when I land."

"Hello Elle Thank you very much for opportunity to take the 100 Day Challenge this year. I took last year's Challenge too, and found both years' daily posts to be a mixture of inspiration, gentle encouragement and insightful reminders. The Motivate Me posts were added reinforcement. Receiving the workbook today was a bonus. It means that I can keep printing it out so that the challenges need never stop. Thank you too to your alter ego, the Information Management Elle. As an Information Management practitioner, consultant and trainer, one of the publications I have read regularly is Information Overload - both editions. And sometimes the best bit was the Thought To Ponder, some of which live on in notes and posters around my work area. (Somehow I fell off the mailing list, but now I'm back on it.) I've long forgotten which I found first, Information Overload or Motivate Me. (Actually I found the ARRM first, but that precedes your involvement by a long shot.) Either way, I have benefited professionally and personally from your writings, and I am grateful for your generosity in sharing them. "

"Thanks for connecting on LinkedIn this week. As a long term subscriber I've always enjoyed the little nudges your emails put into my routine.After recently getting cheesed off with with big business & time-killing agency recruiters, I thought the time had come to finally launch the business idea I've had nagging away at me for several years.Motivate Me's recurrent themes of personal belief and not listening to that negative voice (internal and sometimes external!) finally convinced me to chance my arm.If it doesn't work out then at least I tried, and sitting here on Day One with no clients & no income, I feel strangely happy!At the moment I'm reading the book David & Goliath: Underdogs, Misfits & The Art of Battling Giants by Malcolm Gladwell. There is an interesting theme in there of 'Desirable Difficulty' - basically it is not until you stare into your own personal void of failure that you figure out the strategies you need to succeed - and you're likely to become more successful the closer to the edge of that void you get. Comfortable, secure people it seems tend not to innovate all that much - why change what is working so well for yourself?Sometimes I think that your emails have stopped, as it seems like weeks or months since I got one. Then I look back through my inbox and see them all nested in among the daily deluge, and that's a good time for a catchup. I think sometimes the cumulative power of all those little pokes in the rib to do/think/innovate are what snaps me out of the stupor.So while I may still indulge in the fantasy of a blind-luck lotto win (hey - SOMEONE in Perth got the $30 Million last week!), and I'll keep half an eye out on Seek for the next big executive job advert that has my name written all over it, I'll also be squirrelling away, trying to do my own thing - pulling some trapeze jumps with no safety net below.Even if I don't make my first cent I've already learned new things about myself, I've reconnected with old contacts, and I've glimpsed that dark hole of failure just on the horizon that awaits if I sit on my rear and do nothing. Hopefully the knowledge of that (and your ongoing Motivate Me emails) will be sufficient to push me on to some level of success.Many thanks,P.S. I reckon your due another credit. Since I finished university in 1997 I've been fiddling around with a screenplay that never got finished. Well this year I did, and I entered it into 2 international competitions where it came... nowhere! Never mind - that process of completing it felt very good, and the excitement of having it judged lifted my mood for several months. Even though it bombed that's OK - I now know I CAN write another one if I want to (and I probably will), and it gave me an unusual story to dine out on for a while "oh yes - my screenplay is being judged at the Oscar's this year. I could get to go to L.A. in November!". Again, I'd say the Chinese water-torture that is Motivate Me went some way towards getting me over that line."

"Hi, We had a couple of email last year when I built a coffin for a friends dad.I filter out most junk mail, and delete just about every other regular email except for your musings. I enjoy your regular updates, possibly because you are not yet the professional writer of your ambitions but putting your efforts into your e-zine instead.I also find a surprisingly large number of parallels, maybe that is why your writing has so much relevance. 20 years ago I was competing for the New Zealand Olympic sailing team. While I did not make it by a large margin, we (a two man boat) did beat the previous Olympic reps, so it was worth giving it a go. It cost a lot personally and financially, but I have never regretted the cost, or the failure. More importantly, I have never had to regret having to think if only, I don't believe in if only's. I'm 50 next year, and dam well looking forward to it. I'm going to be the same weight as I was when I was 25 - I happen to have a record from a set of pay scales that I kept the docket from quarter of a century ago. It's not my ideal weight, a bit light for my age/size, but I don't care, I'm going to be that weight just on principle, and dam fit too. This year I'm learning to snowboard, and loving it. A real advantage living where I do in New Zealand. I've progressed off the beginner slopes, through the intermediate slopes and am just starting to survive the easiest of the black runs. Maybe survive is a a bit of a stretch as I'm having to give my body a 2 week break while a massive bruise that extend more than 1/4 the way around my body heals - there are some limits that need to be imposed.Anyway, enough of my musings - keep the writing going - there are people out here that read them."

Genuine comments from ordinary people from all walks-of-life:

"Thank you! I am enjoying your words of wisdom! I am taking time for me again as a mother of 3 small boys and I am finding that it works WONDERS to clear my mInd and decrease stress!"

"Why is it that every time I receive an email its perfect timing for everything going on in my life. I love them thank for taking the time out of your day to help others I for one am grateful"